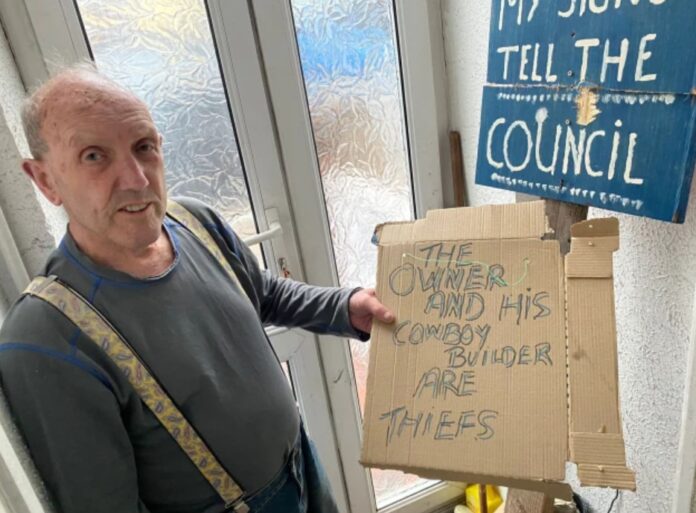 Southern Daily Echo: Rocked up to your university graduation ceremony cosplaying as a character from Star Wars? HOME YOU GO!

Of all the HOME YOU GO stories we’ve ever had on Angry People In Local Newspapers, this is by some distance the most justified.

For a start he bunked off his shift drying trays in the Death Star Canteen to be there, and his boss Geoff Vader is FURIOUS.

And secondly, it’s all made up. If Sir Alec Guinness were alive today, I dare say he’d be up behind you to give you the wedgie of your life, in true Jedi style.

This could well be the final nail in the coffin of UK retail.

Think again Barry, before you wreck everything.

It’s the Commonwealth Games, and medal contenders for the solo and team scowling competitions are already limbering up:

Kent Online: England medal hopeful scowls at no benches at all in Herne Bay seaside shelters

Beautiful British scowling, but Gary here lets the side down by failing to point at the zero benches, removed by those pencil-necked desk jockeys at the council. Good luck in Birmingham, Gary!

Clear favourites for the gold. If there are any broken lamp posts in the Birmingham area, this couple are dead certs to win against a pair of Cornish fishermen, pointing at no fish at all.

Metro: Millionaire (not pictured) builds barrier out of hay bales so that he doesn’t have to see poor people

The joke’s on him, because his view is now of a barrier of hay bales he put there himself.

They’ll never ruin the Queen’s Peace again by trying to push a piano up a steep set of steps.

An absolutely furious set of barcodes.

I’m hardly one to talk, do not even breathe on my priceless collection of Arsenal replica shirts, or God help me…

Either the word ‘forced’ is doing a hell of a lot of heavy lifting here, or that weird humming noise she’s hearing is Coldplay.

I’m not a judgemental sort* but I’m going to go with the latter.

The Clare Champion: Lighthouse Family something something lifted something Ocean Drive something

Honestly, this is not how I remember them on Top of the Pops.

And this is from the man who saw A Flock of Seagulls the other week, and I had to stop them from stealing my chips and crapping on my car.

This summer’s recurring theme is “I missed my holiday because I didn’t check the passport rules for travelling to continental Europe”. Here are a couple of victims of this outrage, in which the word ‘victims’ is used in its loosest possible definition, and ‘outrage’ is a complete lie.

Cornwall Live: Woman blames airport, airline, everybody else, after she wasn’t allowed to board her holiday flight

(It was not – for once – Ryanair’s fault, nor that of Newquay Airport. We’re running out of people to blame here)

Of course that’s not Julian Assange, it’s Uncle Albert who is now dreading having to take the ferry, because he knows it will sink under him.

Yes, we know it’s off-topic and incredibly childish, but the accidental shortening of the word “analysis” is never not funny.

I am 56 years old, and can’t get enough of this and I am not sorry at all.

Weird Headlines of the week, mostly about animals running amok.

Running amok, I tell you.

But this one is the champion:

Metro: Angry man made even angrier after someone stole his angry signs

Pure poetry from the team at Metro, I’m sure you’ll agree.

And if you think you’ve seen this guy before, then you are absolutely correct.

Now, is anybody going to steal his signs that accuse people of stealing his signs? There’s only so much cardboard in the world.

So that’ll be two cats, then.

Regret to report that the Derby Telegraph has been publishing readers’ poetry again.

Every time we think that the poetry can’t get any worse better, a new challenger emerges.

Answer this question: If this doll is not cursed, then why are they selling it?