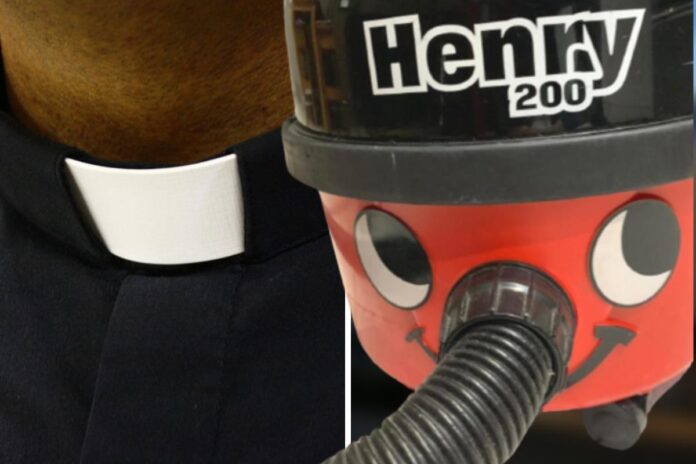 As the silly season cranks up yet further, let’s get this one from Canada out of the way first.

Luckily for everyone, it’s behind a paywall and now we’ll never know how things escalated to this particular level of pettiness. We love it, but some things are better just left alone.

And under the Treaty of Rome, international law stipulates that any ‘bad smell’ story must be illustrated with either a) someone holding their nose, or b) clothes peg on the hooter.

And with climate change, water companies being allowed to flush raw shit into rivers, and your mum, that smell isn’t going to get any better.

We don’t do court reports, but in the words of every vicar who is entertaining Mr and Mrs de Posh for afternoon tea with a view to them making a sizeable donation to the church steeple fund, but his trousers have inexplicably fallen down in a bizarre accident: “Oh crikey”.

And it’s not just us. Has anybody asked how Henry’s feeling about it all? First he’s dragged into Partygate, and now this.

At least the Rev isn’t this guy (by which we don’t mean Respected General Secretary Kim Jong-un, who appears to illustrate the deep bond of man-potato loving)

Metro: Vicar hospitalised with a potato up his bumhole

Look. We’ve been through this already less than a week ago. Don’t stick potatoes into bodily orifices where they don’t belong.

For a start, the old ‘hanging the kitchen curtains while naked and fell arse-first onto a potato’ story just makes baby Jesus cry. Yes, we know there’s nothing in the Bible about putting spuds up your barking spider, just don’t do it. Not even with written permission from a bishop or any other senior clergy.

I believe that the tartan is from the McScrewfix clan.

And anything – anything – that sticks one in the eye of those pencil-necked desk jockeys at the council is good enough for us.

Island Echo: Richard Ayoade out of being funny and clever points out that a wheelie bin which has a notice saying ‘This is not a bin’ is actually still a bin

Richard is a national treasure and we’re lucky to have him.

Keep on sticking it to The Man and his misleading ‘not a bin’ labels!

There’s a lot to unpack here, as there always is when we stumble across what we euphemistically call a ‘Local Character’.

But the one thing I’m going to home in on is the man’s bravery in taking on a career in licensed premises despite having wings instead of hands.

OK, two things: The words ‘psychotic flying scumbags’ in the second paragraph, and we’re writing to the people that name animals an’ that to make this seagulls’ proper title.

And speaking of wildlife…

‘I do not like this dead fox in a box

But I’m partial to cheese and clocks’

Sad to see that Dr Seuss took a truly dark turn and was just dialling it in in his later years.

Teesside Live: Residents ‘holding up hands in horror’ at plans for hundreds of new homes

The more perceptive among you will note that there are zero hands being held up in horror in this photograph.

If anything, the one hand that we can see if actually being held in a direction which can only be described as ‘down’.

It’s this kind of shoddy protesting against things that lets big companies build hundreds of houses.

“Well, we didn’t see any hands being held up in horror,” they’ll say. And they’d pull out this photo as proof. Checkmate.

Hey! Who remembers phone boxes? What were they about, eh?

Birmingham Mail: Phone boxes being used as ‘click and collect’ points for drugs and sex workers

Surely they mean ‘crack and erect’?

And now, it is time to announce the winner of the world’s least newsworthy news story. Hold onto your hats, this one’s a stunner:

Lancashire Live seems to be under the misapprehension that we are interested in every movement of the Radford family, who are mildly interesting for having a very large number of children.

Currently, it’s a blow-by-blow account of their motorhome ‘staycation’ to Morecambe Bay and a girl was surprised by a cat.

It’s not even the first time that non-news from this hellish holiday experience has made it to the pages of Lancashire Live, because (and brace yourselves):