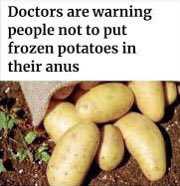 Are we all clear on the frozen potatoes thing? Good.

At the very least, we recommend that they are baked to what government health warnings call “piping hot”.

The trouble being is that there are warnings about everything because there is always that one person. That one person who is the reason why they have product warnings. And here he comes now.

Metro: Man burns his bumhole after wiping his arse with toilet cleaning wipes

And we quote from The Book of Metro:

“The Active Flushable Toilet Wipes he was using says ‘Makes toilets sparkle’ but makes no mention of anuses.”

We also quote from The Book of Johnny Cash:

This is our favourite kind of story because it can easily be summarised like this: “I have been an idiot, and then been a bigger idiot by going to the papers about my idiocy to warn others that this could happen to you too if you’re an idiot as well, and now everybody knows I’m an idiot.”

And to prove that there’s a Simpsons prediction for every occasion:

TV: “Warning: Tickets should not be taken internally”

Homer: “See? because of me they have a warning”

You know what we need right now? A good, old-fashioned compo face.

Kent Online: Man claims he found a tooth in his Fray Bentos Mince and Onion pie

Have you heard? It’s the Summer Heatwave Home You Go season in our schools. This despite us vowing not to do Home You Go any more.

Kent Online: Wearing shorts to school because it’s too hot for trousers? Home you go!

Manchester Evening News: Wearing shorts to school because it’s too hot for trousers? Home you go!

It’s almost as if school uniform policies are inflexible lists of rules put together by pencil-necked desk jockeys somewhere.

Or you could just wear trousers.

This along with The Curse of 3-2-1 (the sickening sight of dustbins being abandoned up and down the country) leads us to believe that there is a hex on any given ITV gameshow.

Metro: Phil Mitchell out of EastEnders has moved to Stoke-on-Trent and is infuriated by the inadequate cycle lane provision

His only option now is to cycle all the way back to Walford and vent his frustration in the usual manner: Flushing Ian Beale’s head down the toilet.

Newbury Today: Oldiewonk hijacks a digger to protest against parish council’s plans for [checks notes] a café which could destroy village life forever

You have to be Jewson kidding me.

This one is about 5,000 miles off topic for Angry People in Local Newspapers, but…

Setting up a fake Indian Premier League in a random farmer’s field with a bunch of locals pretending to be top cricketers, while streaming the event on YouTube with dubbed-on crowd noise, in order to con gamblers would usually be seen as A Very Bad Thing.

But you’ve got to admire the fact that despite the obviously shoddy set-up, the police didn’t move in until the ‘tournament’ had reached the quarter-final stages and the Russian punters mugs had been separated from about 4,000 of your finest US Dollars.

And you know, what with [gestures at everything in the whole world], this is bloody hilarious to see.

And to prove it, the time Putin’s Russia arrested a bin.

Tough on bins, tough on the causes of bins.

No APILN roundup would be complete without a DONE A POO story, so:

And he’s gone for the double with the DONE A POO squat, and the nose-holding to prove that there’s a hideous smell.