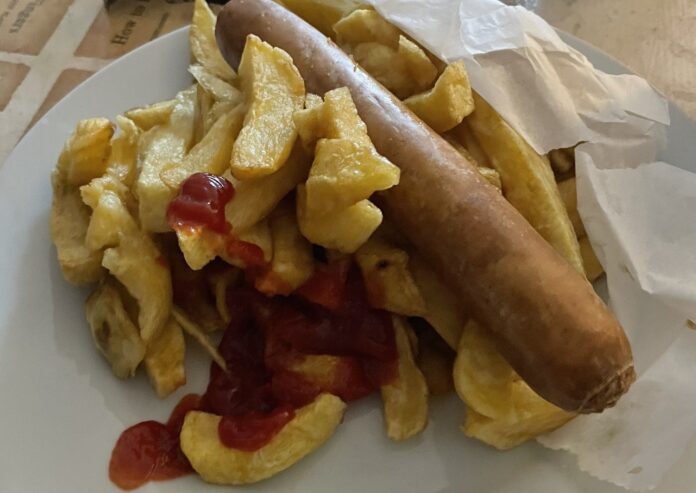 We hope you’ve cooled down after this week’s heatwave. Unfortunately, and we might as well get this over and done with up front, there’s been an outbreak of bad heatwave poetry on Facebook.

Avert your eyes if you are of a nervous or literary disposition, this one it genuinely painful.

If there is one thing – and one thing only – that Len is right about in this poem is his advice not to let your pets cook. They possess neither the culinary skills nor the opposable thumbs to whip up a decent meal.

If I were you, I’d get Deliveroo* in.

*Not actually cooked or delivered by marsupials

They’re right, you know – you shouldn’t be naming your business after well-known murderers. Leaves a bad taste in the mouth. See also:

…and we have disgraced ourselves again.

Bild (in German, paywall): Taxi driver drives 75 miles to reunite Bayern Munich goalkeeper Manuel Neuer with his wallet, is left FUMMIN that his reward is ‘only’ a football shirt

Daily Mirror: The same story, only in English and without the epic compo face

This just goes to confirm that great global constant – no matter where you go in the world, taxi drivers are the angriest of any social group.

Fyens Siftstidende (Danish): Swimmer wants to know why those pencil-necked desk jockeys at the council won’t do anything about seaweed on the beach

You’re on your own with the translation. Ask your local council or education authority about evening classes in Danish.

Or, I dunno, just hit the “translate into English” button on your browser. Either’s good.

This is from New Zealand, and we regret to report that:

a) the Royal New Zealand Air Force’s aerobatics display team has a really terrible name, and

b) they’ve disgraced themselves again.

Have you no sense of history? That belongs in a museum.

Have they tried switching to overarm?

At their landlord’s head?

Tick here seen actual size, because why would the Oxford Mail, produced within the very seat of English learning, lie to us?

We also need to talk about this quote from a victim of this parasitic arachnid rampage:

“I myself pulled one off twice”

FAR too much detail.

And wile we’re on the subject of realistic depictions of animals:

A very strong hint here from the Press and Journal that the next James Bond is going to be (oh-ho!) Steven Seagull!!!!

And as we have mentioned Steven Seagal, we note that any mention of Vladimir Putin’s favourite action star MUST be followed by this photograph of him accepting a gift from Putin’s equally dodgy pal, the president of Belarus:

Our duty thus discharged, we may move on.

I think the unpalatable answer here is “Because somebody else won the holiday to Fiji”.

Other methods of getting to Fiji are available. For example: swimming, travel agents.

My London: ‘I went to London’s allegedly best lido, but there were people there and it was terrible, so I left after an hour’

We don’t do ‘Journalist does normal thing and writes a 700 word article about it’ stories, because they are – by and large – complete bollocks.

But every now and then, one rises up above the dross and deserves the attention. And who knew that London’s most popular lido would be immensely popular on a hot day and actually a bit unpleasant?

The important part is that she had insisted that they cut a conifer hedge into the shape of a Christmas tree, but they strongly advised against it because once you get past the green outer bit, it’s all dead twigs inside. A stand-off ensued.

So we can confidently say that on this day, the 20th day of July in the year of our Lord 2022,