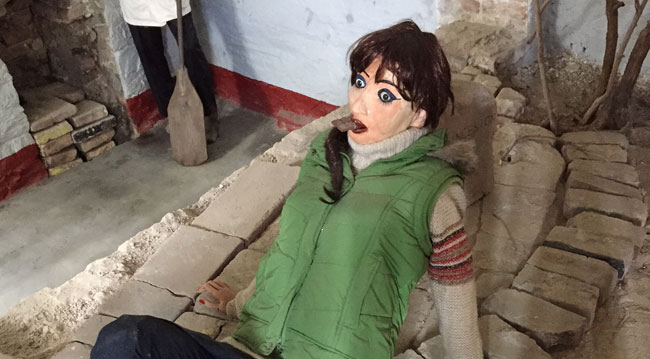 To Bodmin Jail in darkest Cornwall, led on by promises of a spooktacular experience in supposedly one of the most haunted buildings in the south west.

And it contains this unintentionally hilarious gem, more of which later:

But you’ll need to get there soon, because everything is going to change for the better within the next couple of years.

You might recognise Bodmin Jail from the TV. It’s the place where Derek Acorah was mercilessly trolled by the Most Haunted team by getting him to “talk” to a completely fictional South African ghost called Kreed Kafer.

The name is – of course – an anagram of Derek Faker, and the medium’s days on the best worst ghost hunting TV programme that never found an actual ghost were numbered.

So how does Bodmin Jail stand up to the previous worst tourist attraction in the UK?

Here’s what it’s up against: Great Yarmouth’s late lamented House of Wax, where the visitor could gaze upon not-quite likenesses of the world’s greatest celebs. And Noel Edmonds.

Bodmin Jail, then. It’s clear they’ve spent a lot of money on it in recent years, and parts of the building are top notch – the restaurant, the shop, the cafe, for example are fabulous and worth the visit for a quick cuppa – but it is clearly (and I’m going to be charitable here) a work in progress elsewhere. 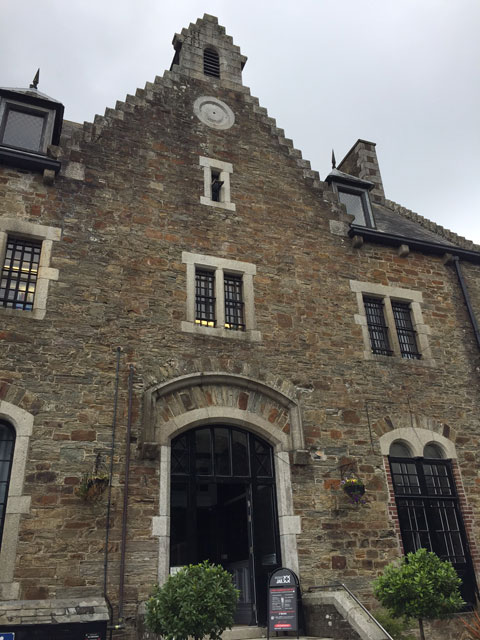 Such a work in progress, the only mention of ghosts are a few newspaper clippings on a wall in the basement. The paranormal exhibit is still being built (June 2017).

As soon as you step through the door into the “exhibit”, you know you are going to be entertained. But not in the way the owners intend.

For example: This video which will made you soil your underwear in fear.

And that’s just the tip of the iceberg.

It’s room upon cellar room containing dioramas of bad mannequins in terrible nylon wigs, most of whom are demonstrating many unusual ways to commit murder or to bugger farm animals. 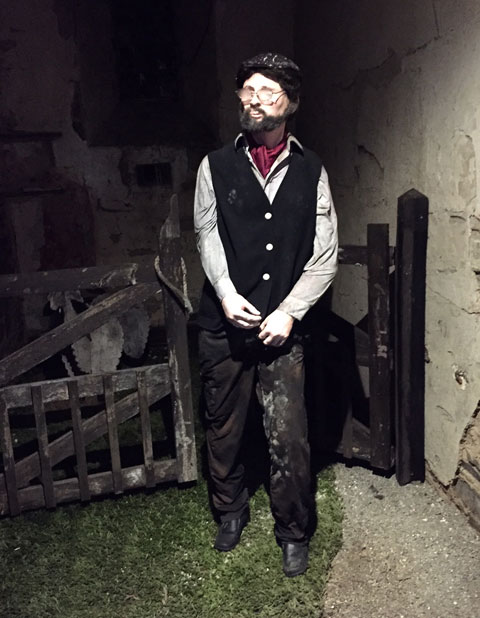 This man has just buggered farm animals, and were it not for the fact that his glasses were steamed up and that it was taking an age to but his pecker away, he would have escaped the clutches of the law, and not dangling on a rope in the execution shed. 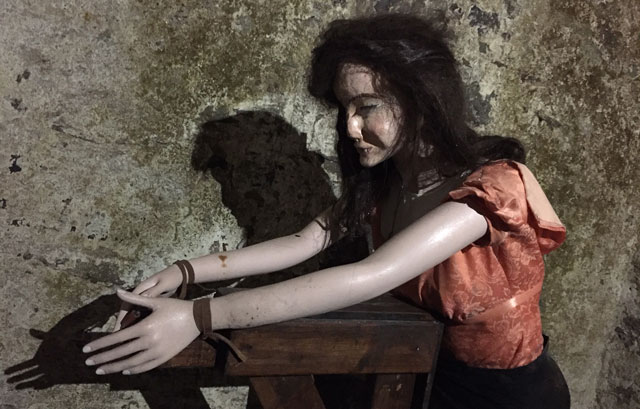 Here is Bjork. She has been tied to a piece of wood because the locals in Cornwall don’t like that kind of Icelandic whooping and hollering.

Don’t do it again round these parts, Bjork. Not even in the Eden Project where those devilish ways are tolerated. 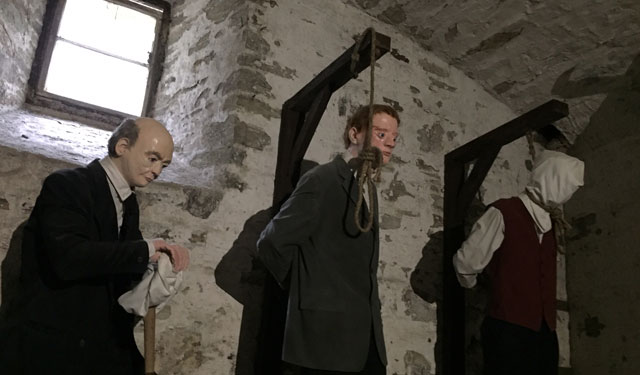 [Eddie Izzard voice] “Look, I’m sorry, we ran out of hoods. I would have brought more if I knew there was going to be such a rush to get hanged” 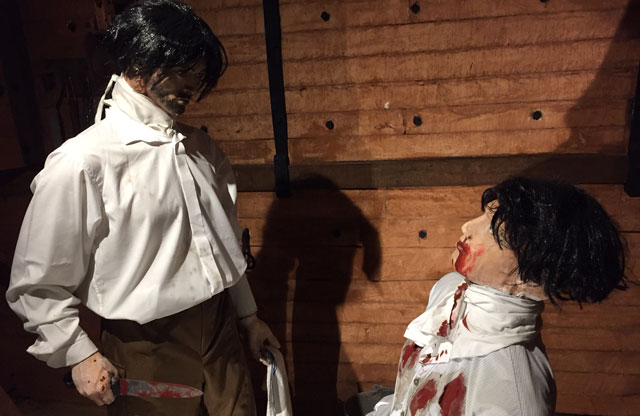 [Prince] “Only one of us can have hair this good, Robbie.” 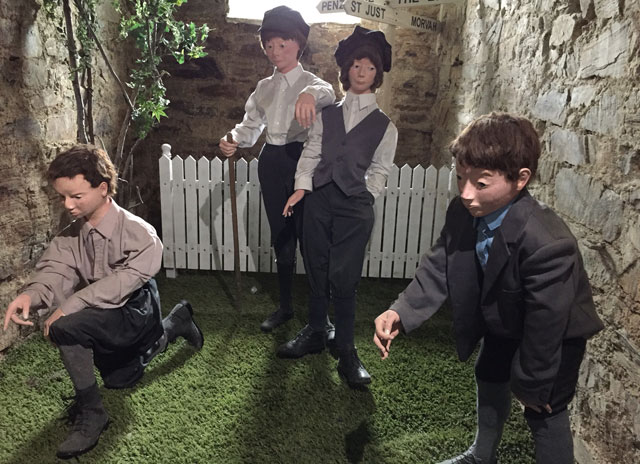 This important presentation on the first floor shows the young Cornish lads who invented Astroturf in 1855. They were locked up in Bodmin Jail, sentenced to a life of hard labour, for their part in the Devil’s work.

Their spirits are said to walk the exhibits during opening hours, saying “God, this is terrible”.

And still the hits keep on coming, including the great Arthur Bostrom from Allo Allo.

“Good moaning. I was pissing by this goal when I noticed zey were looking for bosoms (prison guards).”

Thankfully, this one (from Psychic World website) appears to have been removed from display:

But despite promises of ghostly attractions, the only thing that haunted me was the bloody awful grammar and spelling on the information boards. 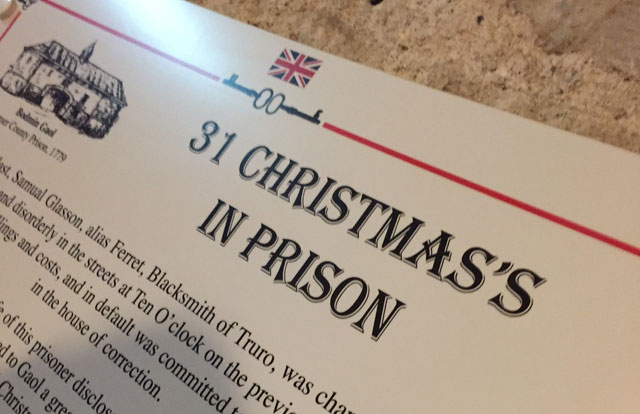 This one deserves the rope. 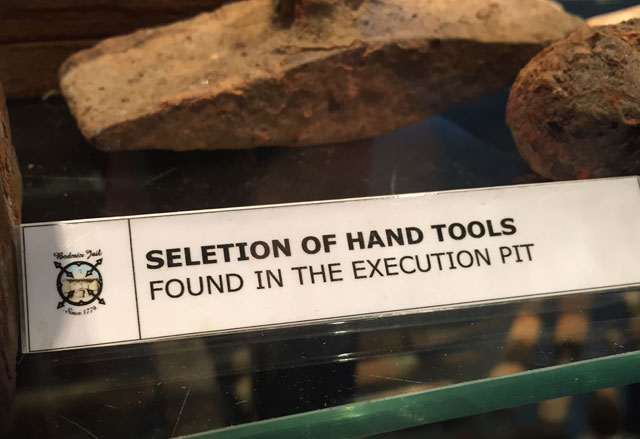 We’ll be merciful for this one. At least it’s not in Comic Sans MS, The Font of Champions.

As Mrs APILN said: “If I was a ghost, I’d be embarrassed to haunt this place”.

31 Chistmas’s Man looks familiar but I can’t quite put my finger on it.

It’s either Doctor Feelgood maestro Wilko Johnson or Kryten from Red Dwarf. Or both.

Also, we found a toilet. 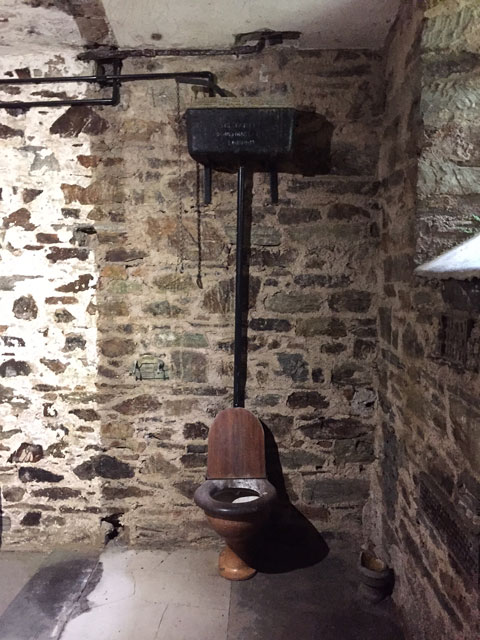 THEY LOCKED A TOILET IN A CELL.

There is no indication as to what it did to deserve this fate. Something shit, I should think.

But we leave the very best of Bodmin Jail until last.

What – I ask you – is this young lady cowering from, a bar of Cadbury’s Dairy Milk Fruit and Nut in her hand, a tin of full-fat Coca-Cola by her side? 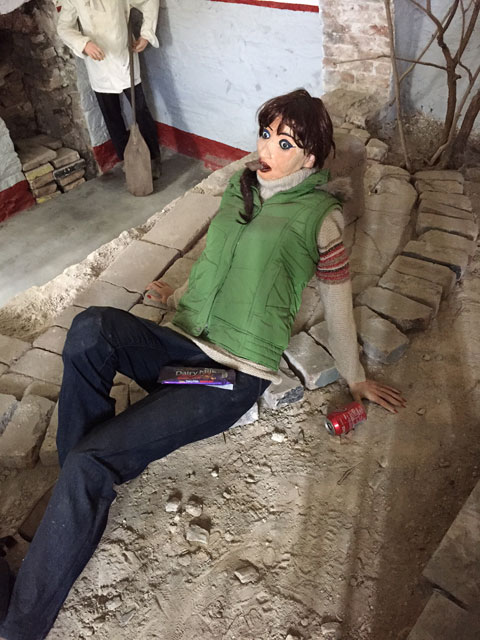 Look at the terror on her face.

When you see what she is seeing, I guarantee you will soil your underwear with TERROR and don’t say I didn’t warn you. 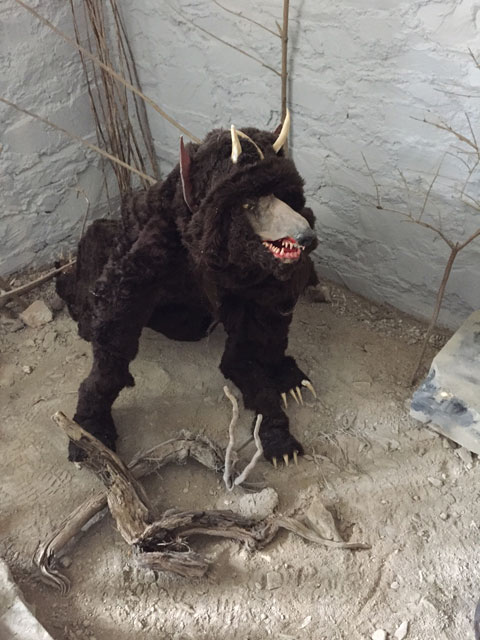 Half goat, half dog, half UKIP voter, plus some bits they had left when the local fancy dress shop had a fire sale. No wonder it’s furious.

It’s at this point, I admit, that I completely lost it. 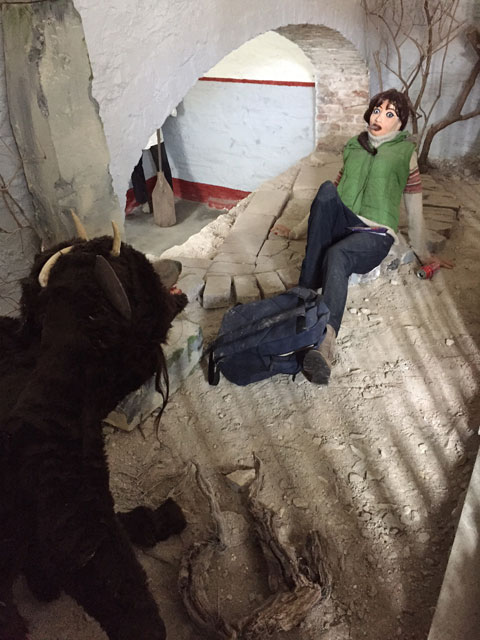 Nothing, and I repeat – NOTHING – on these islands equals this magnificent display. Nothing even comes close.

[Architecturally, it’s beautiful – just take a look at this view of the ruins of the Navy Wing and I dare you not to be impressed by what they have there] 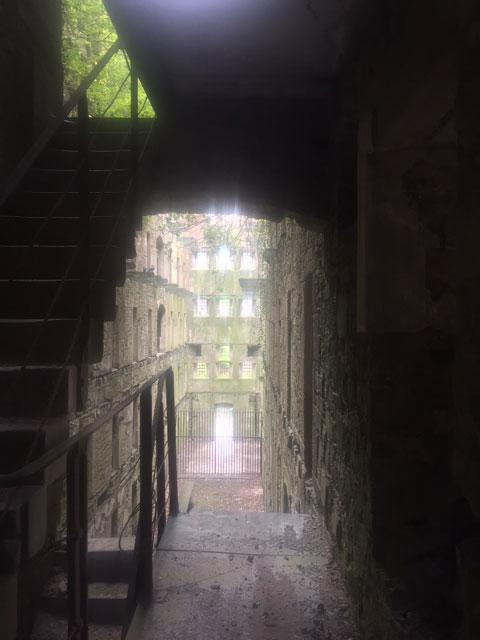 But then they give you this, and you laugh until you cry.

If you are in the south west and in the mood for unintentional comedy, I urge you to visit. It’s the best ten quid you’ll ever spend.

UPDATE: We’ve been noticed by the local press, and now I might not make it out of Cornwall with my life.

The great news for visitors (but bad news if you’re fans of niche comedy) is that Bodmin Jail is soon going to be upgraded into a first class tourist attraction and hotel. The plans look incredible and something to come back to in 2019 when the £12.5m project is complete.

But do visit now if you can, it’s incredible for entirely different reasons.