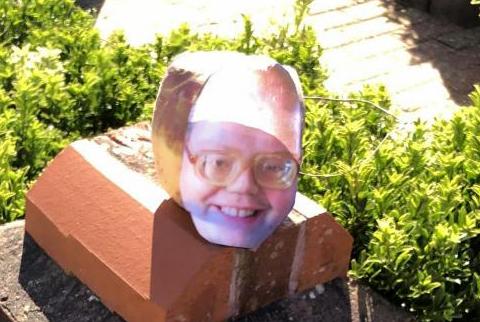 It has been an epic week for Angry People in Local Newspapers stories, and it would be a tragedy if these epic stories of citizens and their struggles against the cruelty of the world we live in and life in general were lost to the ages.

Gird your loins, we’re going in.

(Please click through to the stories to help support local journalism)

Hull Daily Mail: Man reverses his car into his bins, wants council to pay him compensation

Bin day, usually a cause for celebration, turned into a nightmare for this gentleman after the refuse collection operators left the empties on his drive for him to skittle in his Range Rover.

Of course, it is entirely the council’s fault for leaving the bins in exactly the place he’d run over them by not looking or paying attention to his vehicle’s reversing sensors.

The state of this. Utter bloody chaos. And not his fault at all.

I’m only including this story because these three dedicated patriots are holding the Union Flag upside down. Well done lads.

A local man has spoken of his shock after finding a number of masked swedes (the seasonal vegetables, and not a group of vindictive Scandinavians) surrounding his house.

To be perfectly honest, if you live in a bungalow in Southampton, that’s not the kind of thing you need to wake up to. But yet, here we are.

Grimsby Telegraph: Mum claims self-scan device ‘malfunctioned’ after being banned from every Asda supermarket in the country over £16 of allegedly unpaid shopping

Absolutely textbook photography here: The receipt, the half-empty food cupboard, and the face of bewildered innocence.

Brighton Argus: Man says he has lost faith in Aldi’s bacon-flavoured crisps (multipack, single bags not to be sold separately) after finding packet held together by packing tape

This one ticks all the boxes, because he gives his name, ages, where he lives, his snack preference, and place of employment, yet doesn’t wish to show his face in public.

We can only assume that he’s terrified the Monster Munch monsters will find him and mess him up for going off-brand.

Mirror: Former model, aged 81, threatened with jail if she continues wearing a bikini in her own garden where kiddiewinks might be able to see her

Yeah, there’s bikini shots if you click through if you’re that way inclined. It’s just a woman in a bikini and no kiddiewinks will be harmed.

If you click through, you get no less than nine photographs of retired survival instructor Roy looking annoyed in from of his illegal washing line.

Yeah, we know, it’s bloody stupid. Mess them up, Roy.

Chronicle Live: Man who has to pay £25 for permit to park outside his home paints furious message to the local council on his house

It’s probably going to cost him something north of twenty-five notes to scrub that lot from his walls when everybody won’t stop laughing.

“Siri: Show me an epic self-own”

There’s so much going on in this story, but every has missed the most important aspect.

To whit: LOOK AT THE TINY DOGGO IN HER LITTLE HI-VIS TABARD.

And finally, don’t have nightmares…

KILL IT! KILL IT WITH FIRE AND STICKS!!