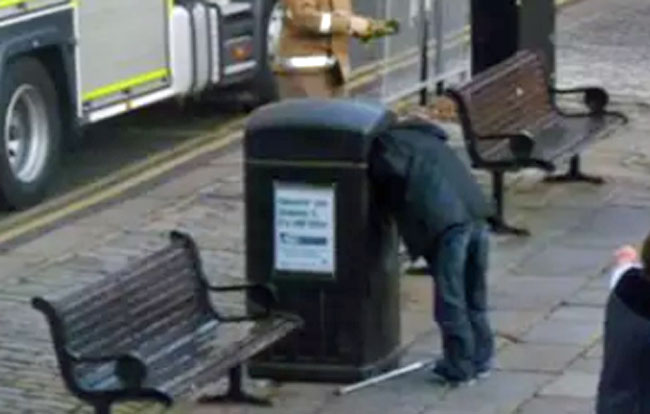 In our case, five years farting about on the internet has truly rushed by, which is why we are – today – celebrating this important anniversary. 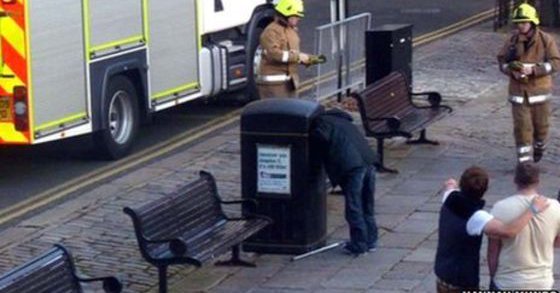 BBC North East Scotland: Man freed after getting his head stuck in a bin in Aberdeen

Having fallen head first into a public litter bin myself (shut up, I mistook it for a post box because I’m an idiot and I had to rescue the gas bill), I am personally relieved that there was not video of my predicament.

Alas for Willie ‘Bucket Heid’ Middleton, there was loads.

Luckily, partially-sighted Willie seems to have taken his fame in his stride, telling the BBC that he was looking for a lost hat.

“I couldn’t get my head out. It was shocking. It was stinking. I’m now known as bucket heid.”

And the report continues:

One witness, who did not want to be named, said: “I walked around the corner and saw his walking stick on the ground and his bum sticking out and said ‘that’s Willie’.

“Me and my pals tried to pull him out but his ears were stuck.”

So, where is Willie ‘Bucket Heid’ Middleton now, five years after his ordeal?

We phoned up Aberdeen, and they say he’s still there.

And while we’re on the subject of time flying, here’s Fenton the Dog in the original Jesus Christ in Richmond Park video

This is going to age you – Fenton the Dog and all the internet memes that followed will be six years old next month.

I remember when all this was fields, you know.