The author of the newly-published Angry People in Local Newspapers book has launched a one-man campaign after being snubbed by his local newspaper.

Fuming Alistair Coleman was told by editors at the local title that he “wasn’t local enough” for a feature on his new book in the paper, despite living a mere five miles from their editorial offices, and the publication having sold out at the local bookshop just yards away.

Fleet, Hampshire-based Alistair, 52, approached the paper (which he has chosen not to name, but sounds like the Farmhand Gerald), in nearby Farnham, Surrey, but was “gobsmacked” to be told that living in Fleet “is a bit of a stretch for us”, by editorial staff.

“I’m totally gobsmacked to say the least,” says journalist Alistair, whose Angry People in Local Newspapers book – which features pictures of people being angry in local newspapers – was published by Penguin Random House on 15 November. “I’ve had interest from local newspapers all over the country, but to be blanked by the nearest title to my home is a tough one to swallow.

“After all, I love the Gerald, and you should too.”

Local newspaper based five miles from my front door won't feature my Angry People in Local Newspapers book because I'm "not local enough". I'm going to stand scowling outside their office tomorrow, THEN SEND THEM THE PHOTO.

Following up on an outburst on Twitter, in which he promised to stand outside the offices of The Farmhand Gerald, pose angrily and then send them the photo, Mr Coleman drove himself the mere five miles to Farnham, paid a pound for parking, took photographs of himself scowling outside their offices and sent them the results to see “how they like them apples”.

He’s vowed to conduct a one-man campaign to encourage the people of Farnham in Surrey to go out and buy the book, “and I’m not going to take ‘no’ for an answer”.

“I will not rest until every man, woman and child in Surrey has heard of my book,” he says. “This is important.”

In reality, Mr Coleman has no real beef with the Gerald, which is an independent local weekly which has served the town since the last decade of the 19th Century and is a much-loved local institution.

“But,” Alistair muses, “surely their world doesn’t end at the summit of Beacon Hill where they look down at their Hampshire neighbours in Fleet?

“We’re good neighbours who like to share the best things in life, such as my newly-published book available online, in electronic form, and in traditional bookshops. Like the Farnham branch of Waterstones, for example.”

“And besides, Farnham’s got a cracking owl sanctuary.”

UPDATE: The lovely people at the …err… Herald have been in touch and we’re going to run a full feature and competitions.

Labour of Love (not the UB40 version)

So, what’s it all about?

The book Angry People in Local Newspapers is a celebration of the world of local news publishing, in particular those people who have found themselves done wrong by the world, choosing to illustrate their fury by posing with, in front of, or pointing at the thing that made them angry.

It’s the product of ten years of blogging the phenomenon on Alistair’s award-winning website, as well as the hit page on Facebook which now boasts around a quarter of a million followers.

Described by TV and radio personality Paul Ross as a “proper Velvet Underground book – a genuine ‘loo read'”, it features some of the funniest stories of FUMING Britons (and the odd Aussie and New Zealander) thoroughly annoyed at parking tickets, buses, noisy neighbours and the eternal favourite – BINS.

“It’s a true labour of love,” says Alistair, whose day job sees him covering the sobering issues of Fake News and North Korea for the British Broadcasting Corporation, “and it’s left me with admiration for the hard-working journalists who produce local news wherever they are.

“Local news is important,” he says, “It’s the glue that holds society together, holds power to account , and has people engaging with their local communities.

“And when you see a news story go viral in the nationals, it’s often because it’s been dug up by a local journalist.

“We need to support local papers such as all of my local titles – the Fleet and Yateley News and Mail, the Basingstoke Gazette, and – of course – the Farnham and Alton Herald, and the best way is to go out and buy a copy.”

He also says he’s seen enough angry people looking at bins to last him a lifetime, but can be seen on page 134 of his own book joining in the fun himself.

It’s not even his own bin.

The Angry People in Local Newspapers book is in the shops. The ideal present for people who collect photos of furious people pointing at bins

Here are some photos from the Angry People in Local Newspapers book. Why not collect them all?

All images in this piece are copyright cleared for editors. Help yourselves, or contact alistair dot coleman at gmail dot com for originals. 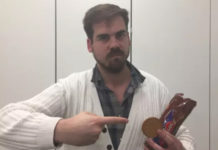